Here's a look at some of our favourite pieces.

A cannon from the Crimean war sits proudly outside Ludlow Castle and was first positioned there in November 1857.

The gun is surrounded by an iron palisade, and an ornamental chain cable attached to six iron columns, surmounted by a cannon ball.

The Hon. Percy Egerton Herbert (1822–76), second son of the second earl of Powis and grandson of Robert Clive (of India), served in the Crimean War and he was thanked for his service in 1856 with a procession through Ludlow.

The two cannon balls on display were donated to Shropshire Museums by Edward Williams and Ludlow Grammar School. 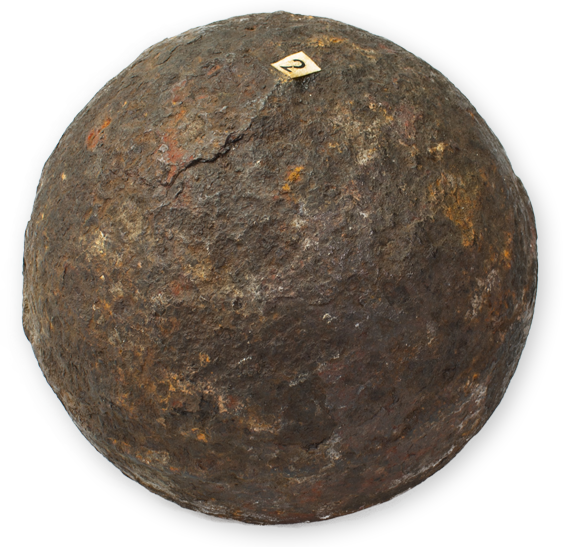 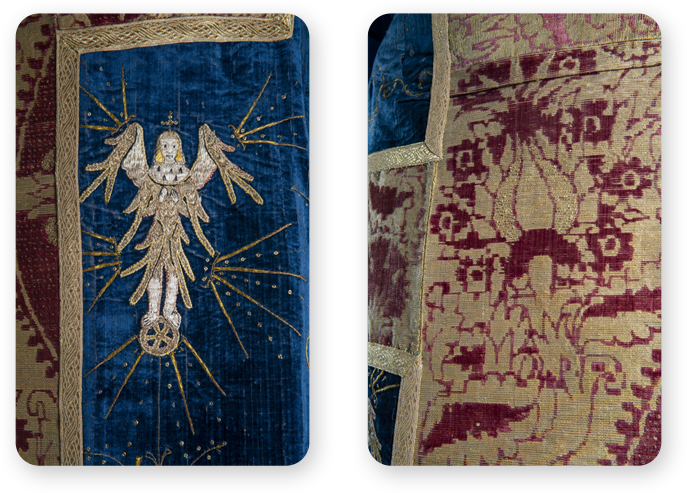 Believed to have been made as a result of the wishes of Catherine of Aragon, who lived in Ludlow Castle with her first husband, Arthur Prince of Wales, between 1501 and 1502.

She later married Arthur’s brother, King Henry VIII, and she was the Queen of England between 1509 and 1533.

The pomegranate motif was Catherine’s own personal emblem. Following Catherine’s will gowns were made and passed to Catherine’s former ladies-in-waiting and were then handed down by their families.

This chasuble was restored in the 1990s and is on loan to the Museum by the Catholic Community of St Elisabeth’s in Cleobury Mortimer and St Peters in Ludlow.

Seal of the Council of Wales and the Marches

Belonging to the last Chief Justice of the Court and now owned by Shropshire Museums.

The Council of Wales and the Marches was based in Ludlow Castle between the 15th and 17th centuries. It was abolished in 1689.

The seal is in remarkably good condition. 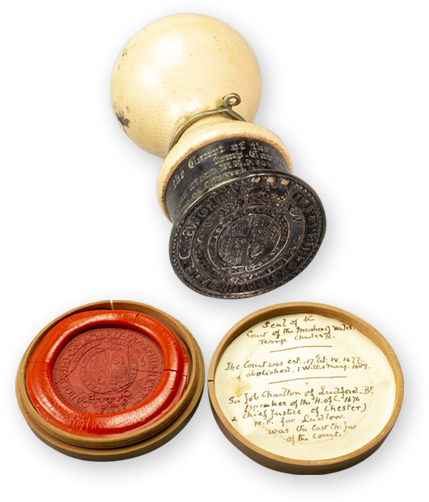 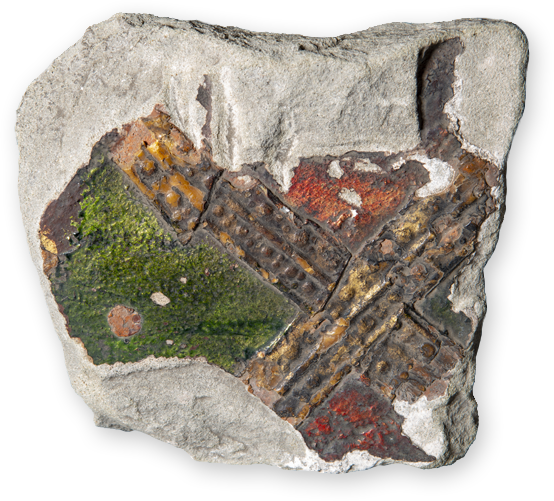 The selection of medieval encaustic floor tiles on display are believed to be from 14th and 15th century from the monastery of Austin Friars in Ludlow.

The site of the monastery was near to the location of Friars Walk.

It is believed that the friars first came to Ludlow in around 1254 and the buried remains of a convent were discovered in 1861 by workmen laying a new sewer. We believe they are unique to Ludlow.

In historic times Ludlow had two guilds and one of these was known as the Company of Stitchmen. They regulated the textile industry and provided aid to their members.

This barrel would have been used to collect the fees from each business. Guilds were a vital part of Medieval Europe but were abolished in the1800s 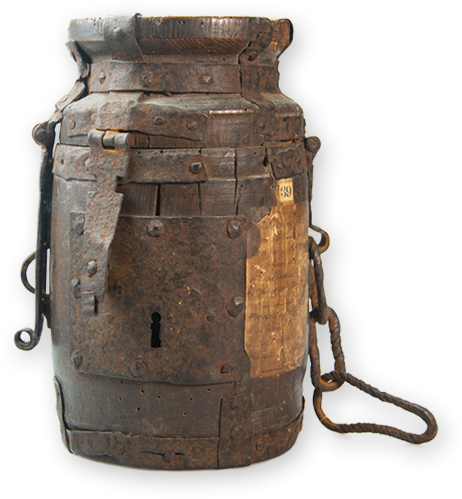 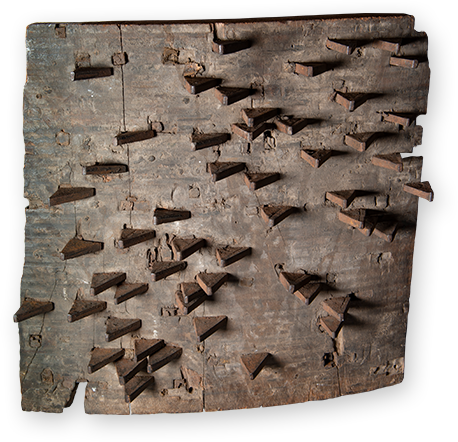 This carillon fragment is from St Laurences church, just behind the Museum.

A carillon is an automatic system used for chiming bells using small hammers and a carillon has been use in St Laurences since 1683. The mechanism on display in the church’s north aisle was installed in 1795 and largely renewed in 1890.

Most people will agree with you that Ludlow wouldn’t be the same without the beautiful bells ringing out each day. It is especially lovely when we open the Museum at 10am on a Sunday!

In the early 1800’s glove making was a major local industry in this area with a production of around 650,000 gloves in 1814. Leading the two to develop and grow as a fashionable social centre in the 18th and 19th centuries.

Gloves were made from the skins of animals such as sheep, does, and goats and also materials like silk and satin. They were popular gifts and seen as an item of status.

These shears were an anonymous donation to the Shropshire Museums. 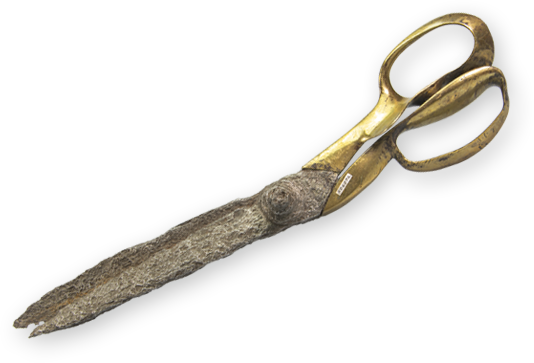 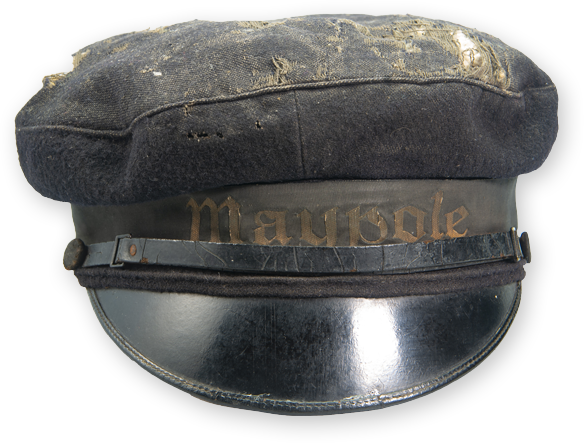 The Maypole was a dairy shop at 15 King Street in Ludlow which is just a few hundred yards from the Buttercross. It sold various items such as tea, butter, cheese and jams.

The older shops in King Street, such as this one, have lovely ornate and distinctive shopfronts. Maypole dairies/grocery shops were a national chain in the 1950s/60s.

This cap was donated by Simons Ltd.

The end section of the 19th century Ludlow tug-o-war rope is on display. The contest was mentioned in Felton’s ‘History of Ludlow’ in 1811 as a competition which took place annually on Shrove Tuesday and the rope (36 yards long) was provided at the expense of the Chamberlain or Chief Constable.At 3pm it would be suspended at one of the Market Hall windows until the close strikes 4 when it is thrown into the street and sized by the hands of several hundred persons.

The story is that the loosing team was dragged down to the river and thrown in.

This is a tradition which continues but with a twist. The annual tug-o-war takes place every Boxing Day in Corve Street and the competition is between the two opposing public houses – The Feathers and the Bull Hotel. 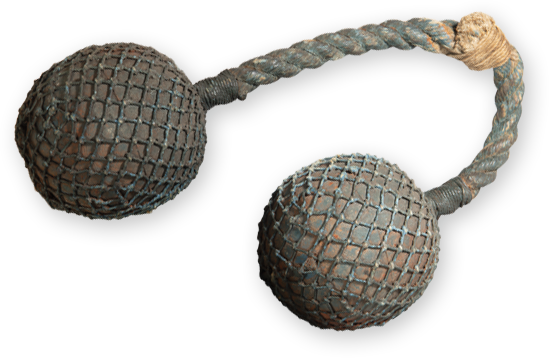 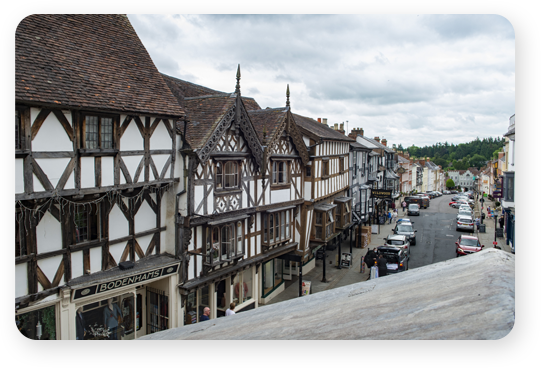 Broad Street is a fine example of Georgian Ludlow. Taverns and coaching inns built during the 15th and 16th centuries boomed during the Georgian period as places to socialise.

The Angel Hotel in Broad Street was one such hotel and it was visited by Lord Nelson in 1802.

By the 18th century Broad Street was the route of the mail coach from London, although the steep gradient from Ludford bridge and low headroom under the Broadgate arch caused problems for the horse drawn vehicles.

Thomas Telford was commissioned to solve this problem and instructed that the road level below the Broadgate should be lowered by 1m, lessening the gradient uphill.

This footprint on a slate roof has a great deal of detail on its surface that is very difficult to see within our display.

It is possible to make out some writing which includes the name and date, 23rd July 1819.

This was an anonymous donation to Shropshire Museums and unfortunately we have no further information about the crime committed by R Roberts. 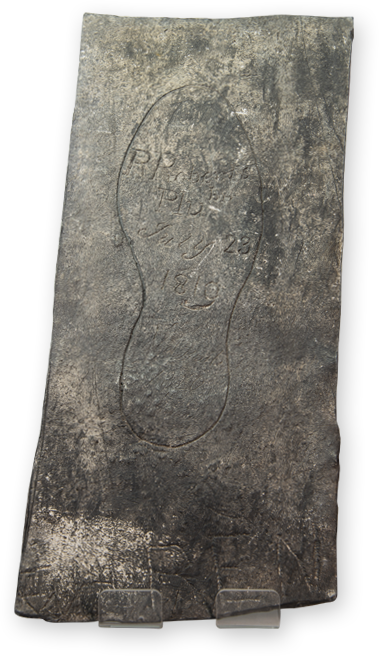 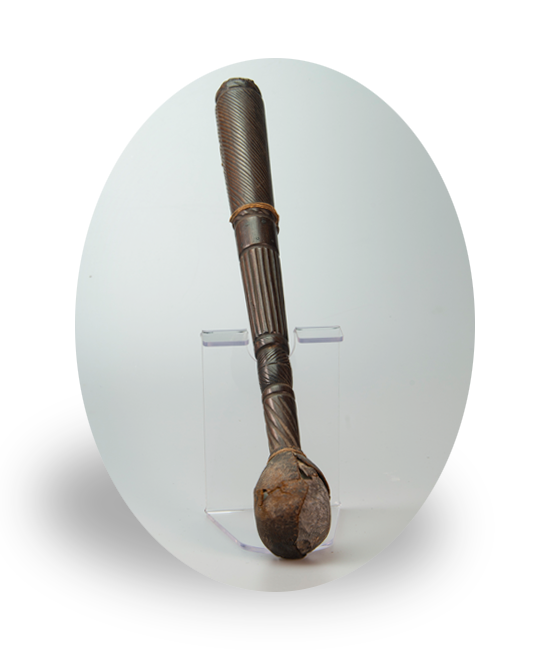 Before the establishment of a national police force in 1837, Ludlow had its own night watchmen and constables who enforced order in the town.

Watchmen have existed since earliest recorded times in various guises. Night watchmen patrolled the streets from 9 or 10pm until sunrise, and examined all suspicious characters to prevent crimes, watch out for fires and ensure people weren’t prowling around under the cover of darkness.

From Saxons to the coral sea

The pommel was found in Ludlow in the late 1990’s and is believed to be a cap stripped from the end of small saxon sword or dagger.

The pommel is gold with red cloisonne decoration. 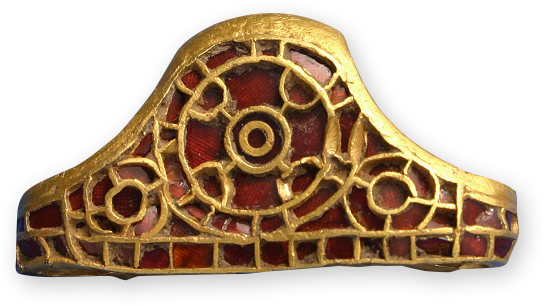 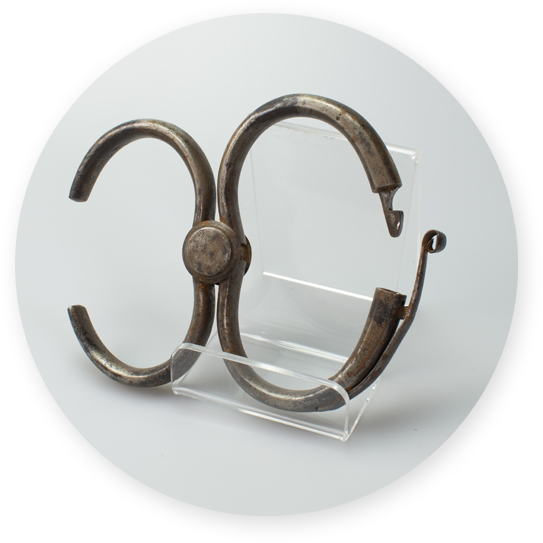 The first metal handcuffs came in to existence with the bronze and iron ages, and were ‘one size fits all’ for centuries. The pair we have is unusual as one side is much smaller than the other. In 1862 the first ratchable design was introduced to allow for the smaller and larger sized wrists so we believe our pair on display are earlier than this date.

Around 242 million years ago the shallow seas covering Ludlow formed the Whitcliffe Formation.

Trilobites are fossil arthropods that were recognised by their three segment form and were exclusively marine animals. 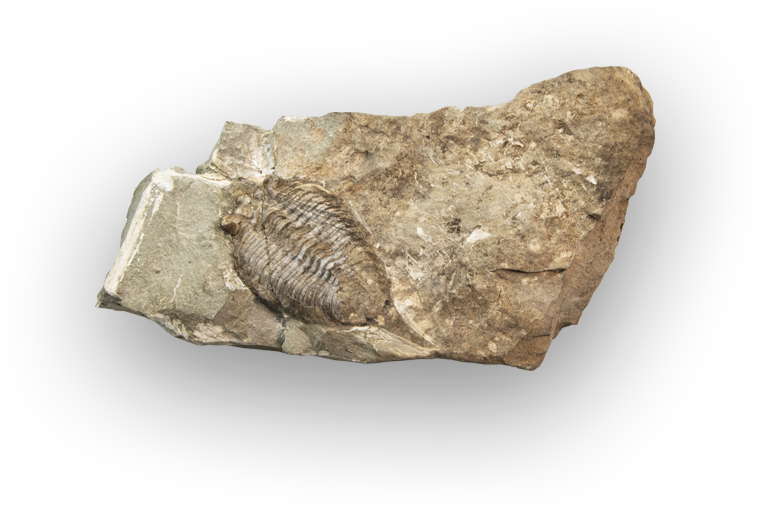 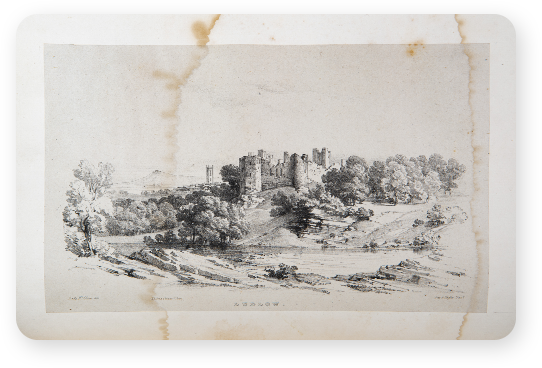 The Silurian System by Murchison

Sir Roderick Impey Murchison was born in 1792 and became a world renowned geologist. Whilst studying early Palaeozoic rocks in South Wales and nearby areas his findings were presented at The Silurian System in 1839. Ludlow is a subdivision of Silurian era and it was during this time period, millions of years ago, that species diversified into bony fish, vascular plants and arthropods. We also have a section of the original illustrations by Murchison on display in our Museum and it is approx. 10 feet long.

Impy is a very popular taxidermy dog who resides in the study of Sir Murchison.

He was donated to Shropshire Museums several decades ago and was carried in an Imperial Water box, hence his name, however his name may also be taken from Sir Murchison.

At the Museum we believe Impy will have had wonderful adventures during his lifetime and they have been brought to life with Impy’s Tails created for us by a local history enthusiast. 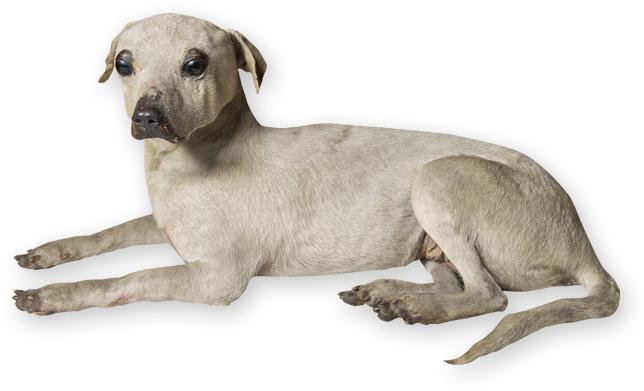